skip to main | skip to sidebar

It's been so long since I have posted on here that blogspot has changed all of their dashboard functions so I am hoping this posts correctly. Our baby boy is somehow turning into a kid rather than a baby. Of course that gives me mixed emotions. I am happy that he is growing and happy and healthy, but sad because I want stop time. If he grows up he might...leave me! This poor kid is going to have a mom that wants to follow him to college and live with him after he's married. My husband would never let me, but that may not stop me from trying ;) Here is an updated picture of our family. We had an awesome beach vacation at Justin's Beach House courtesy of the Justin Jenning's Foundation. It was great to have both sets of grandparents there with us! Gavin was convinced that the beach house was our new house and that we lived in Delaware. When we got home he kept crying and telling me that we had to go back to our house in Delaware! I think after 3 weeks he is finally adjusting to our actual, but much less exciting home :) 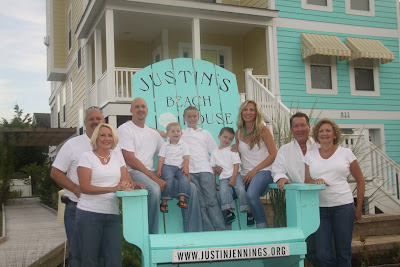 Grayson is still going to clinic once a month until December when he has hopefully his final surgery and last bone marrow biopsy in the OR. His bloodwork has looked beautiful and he is the most compliant patient.

I am posting today because today was a very, very special day for our family. We were reunited with two of the best nurses JH has to offer, Alex Thompson and Kasey Mikula (who now run charge all by themselves). 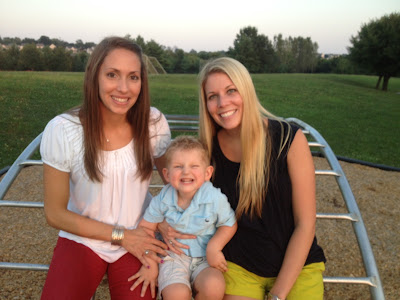 I wasn't sure how Grayson would respond because I knew he wouldn't remember them but I was hoping he would warm up to them. Fortunately he likes pretty girls, so he was climbing in their laps in no time at all!

I can't really explain to you all what it meant for these girls to drive over an hour to come to Westminster to visit with us. We have not seen them for 18 months and to all the sudden get to have them in our home was like having part of our family come home. These girls became part of our family while we were at Hopkins and it makes me teary that we weren't allowed to see them (a sort-of hospital policy) until Grayson was completely healthy and there was no chance he would be admitted again. Praise God he is too healthy for any of that! Anyway, we got to be reunited with part of our family and it was like no time had past. They fell right in step with our rambunctious boys and were playing Nerf basketball in no time.They chased my boys around the playground and had an ice cream picnic. It was just a perfect day. As they were leaving Grayson gave them both nice long snugly hugs and stayed in Kasey's arms for a good while to twirl his fingers in her hair. He used to do that when he was inpatient. It was so incredibly precious! Gavin told me he wanted to go home with them and I told him he couldn't. He watched them get in their car and said, "but mom, I really like those girls." We all just love those girls to pieces! 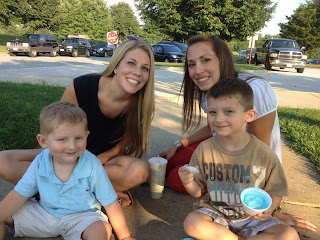